We wanted to share with you a number of sporting successes from Year 7 student, Zac B-W. 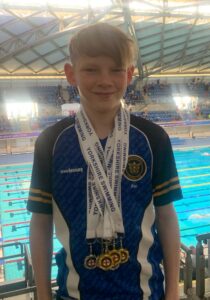 From a young age Zac has enjoyed taking part in Swimming, Hockey and Golf and has continued his commitments to these sports throughout his studies at South Hunsley. As well as these, Zac has also joined South Hunsley School Rugby team and enjoys participating in training sessions after school in preparation for their upcoming fixtures.

Zac is a member of Kingston upon Hull Swimming Club and currently trains 18 hours a week before and after school, as well as weekends. Zac recently attended the finals of the Yorkshire Swimming Championships, which resulted in him winning 3 gold medals and 6 silver medals in a range of strokes. Zac is currently training for the North East Region swimming competition at the end of April and aspires to swim at the National Championships next year.

Zac is also an accomplished hockey player and following the recent trials for the U13’s North East Hockey Squad, Zac secured a place in the team and will represent the North East at the regional tournament at Nottingham Hockey Centre later in the year.

Alongside these fantastic achievements, Zac has been presented with the Premiership Shield at Cottingham Parks Golf Club. This prestigious award recognises the achievements of the top performing golfer throughout the season in the Premiership Group of the Junior Performance category.

Mr Williman congratulated Zac, “We are very proud of Zac’s sporting achievements. He has shown excellent levels of dedication and commitment towards his sports and is an inspiration to many other students. We look forward to continue supporting him during his time at South Hunsley”.

Congratulations Zac on your achievements. We look forward to hearing about your future sporting successes and wish you the best of luck in your upcoming competitions.