Congratulations to Year 10 student, Aimee C, who has secured a place in the Under 17 Loughborough Lightening Academy.

Aimee has been playing netball since Year 4 and has continued to pursue her passion throughout school and with local team Kingston Netball Club. As a result of her success in the sport, this year Aimee was selected to play in the Loughborough Lightening Under 15 competition squad. Since then, Aimee’s potential as a promising young player sparked the attention of the coaches and she was offered a place in the Under 17 Loughborough Lightening Academy. Loughborough Lightening is the number 1 Netball Superleague side in the East Midlands and hosts trial opportunities each season to allow athletes the chance to be selected into the elite team.

Aimee explained how becoming a member in the Under 17 Academy will enable her to further develop her skills as a Goal Keeper and Goal Defence by playing with more experienced players. Aimee’s long term ambition is to join the England Roses Academy Netball Squad and hopes progressing within the Lightening Netball Academy will support her to achieve her goal.

Mr Williman congratulated Aimee on her achievement “We are proud of Aimee’s hard work and determination in securing a place in the Under 17 Loughborough Lightening Netball Academy. She has shown true passion and commitment towards her sport and we look forward to supporting her with her future sporting ambitions”.

Congratulations Aimee on your recent achievement. We wish you the best of luck and look forward to hearing about your future successes. 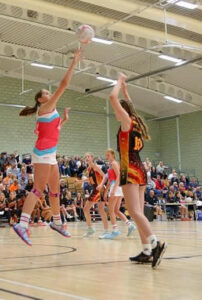